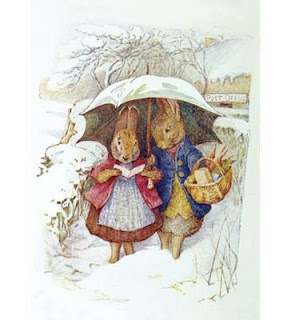 I have been giving my children topics to write about. This was one daughter's assignment. I will later add her name when I have gained her permission.

Helen Beatrix Potter was born to Rupert and Helen Potter on July 28, 1866.
Beatrix lived in London with her parents and her brother, Walter, who was born in 1871. Beatrix and her brother spent childhood holidays in rural scotland and north of England where she sketched and kept small animals as pets, including mammals and amphibians, sometimes contributing to their deaths because she failed to see to their needs. This changed as she grew older.

Beatrix was homeschooled, although she did occasionally visit public gardens, markets, and the Victoria and Albert Museum; the world's largest museum of decorative arts and design.
Potter longed to be independent of her parents and wanted higher education possibly seeking mycology as a career, but her parents discouraged it.
Her uncle tried to enroll her at the Royal Botanic at Kew, but they would not accept her on the account that she was a woman.
On her own she studied many things such as spore germination and the life cycles of fungi and was later one of the first people to suggest that lichens were the result of fungi and algae grouping together.
As the result of her suggestion she was then respected widely for being an expert mycologist.
Beatrix also did many watercolors of fungi, around 270 by 1901, which are located in Armitt Library, Ambleside.
She had also drawn illustrations for Joel Chandler Harris's Uncle Remus stories, which probably inspired her in her own work.
In 1901 Beatrix wrote her first tale. The Tale of Peter Rabbit and Mr. McGregor's Garden. She sent her story to several publishers but it was rejected by all for the fact that she didn't have any colored pictures.
She decided to self-publish and made 250 copies with the new name The Tale of Peter Rabbit. She finally attracted the interest of the publisher Fredrick & Co.
by the end of the year 1902 28,000 copies were printed.
In all, Beatrix wrote 23 children's books.

Beatrix followed her book with The Tale of Squirrel Nutkin in 1903.
Beatrix became secretly engaged to the publisher Norman Warne, but her parents disapproved of her marrying a tradesman. Shortly after the engagement Norman died of pernicious anemia.

In 1913 she married William Heelis and she went on to become a sheep breeder.
Beatrix Potter died on December 22, 1943.

Posted by From Redding Mountain at 6:56 PM