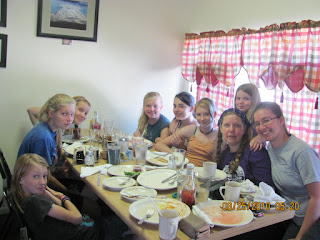 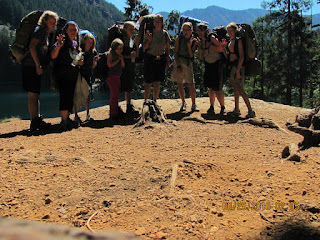 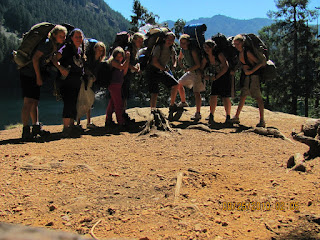 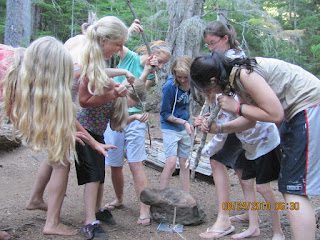 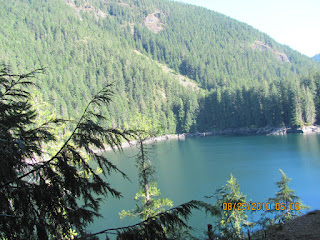 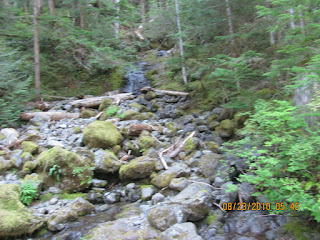 As I slipped on my backpack I wondered how I was going to hike up a mountain in the Olympic Peninsula carrying it. This was my first backpacking trip. My pack was to contain all the food I would need as well as supplies to cook, purify water, and first aid. I was carrying a tent and sleeping bag as well. The pack wasn't the biggest burden I was carrying. I was the oldest member, a chaperone, of an all girl teen/pre-teen group who were more accustomed to having their nails done that hiking. This was a first for most of the group. Before the first mile was behind us we had a few episodes of tears and pain. These were young girls and their packs were too heavy. I knew this was going to be an adventure. Had I known what was in them I would have understood. My three daughters were part of the group. Esther, was only 7 and insisted on carrying her own pack. She was the youngest member of the group and pretty tough being the youngest of 11 children.

The first leg of our journey began with our teen guys group who had done this hike before. We were an aggravation and they wanted to put the first day behind them and get on to the good stuff. We finally managed to get the whole group to the top - it took several hours. There is an elevation gain of 1250 feet and the first camping spots were 3.2 miles up. On top of it all we really slowed the guys down. A few of the guys had made it in half the time we did. One girl made it to the top with the guys. My first daughter Sarah kept up with her brothers and friends.

The girls took their packs off and immediately jumped in the beautiful mountain lake and felt the coldest shocking water they had ever known. They took out HUGE bottles of shampoo and washed their hair. They were a lot happier with clean bodies and freedom from the backpacks. I began to set up camp. The best spots were taken. We had a gorgeous view looking over the mountain lake but it was sloped. We were in the middle of a forest beside a mountain lake. This was definitely one of the most beautiful places I have ever seen. Sleeping on a slope was not my idea of comfort. The girls didn't realize what they were in for that night. We made a fire (before the guys in the next camp, I might add) and cooked our supper. We joined the guys who had a little better camping spot than we did and enjoyed some singing around the fire. We had an encouraging talk about what we had accomplished and what we had overcome that day. We all gladly went to our tents. A couple of girls waited until the guys were asleep and piled rocks in front of their tents and moved their things around a bit as girls are known to do and then slept soundly.

After an adventurous night of sliding about all night, collapsing tents, etc. we made it to morning. The guys barely said good by and were up and out of there to continue their "real" adventures. There were not many people about and we did the wise thing and moved camp to a more level spot actually near the compostable toilets which were a luxury for our group. We ate breakfast and re-set camp and then began our activities of the day. I might add a note about re-setting camp. It was a bit comical to see the girls get on all 4 corners and carry their tents down the trail without taking them down. We found a wonderful spot to place them.

After getting the camp re-set they started surveying the area. None of our group had ever been here. The girls were running around having a great time when I saw two crouched down behind a log. I thought they were about to scare a couple of the girls who were acquiring new skills in the woods. I didn't find out until a few minutes later that they actually had discovered a nude "Russian", they called him, sunbather who thought he was all alone in the forest. After much giggles and girl whistles he departed. He was the last person we saw for that day. The gravity of the responsibility hit me hard. Here I was in the wilderness with a bunch of girls and one nude "Russian". We could see a couple of tents off in the distance but no one else. We decided we had better give a few rules. They could NOT go off alone. They always had to have a buddy and someone needed to know which direction they were going.

The girls wanted to go swimming. The water was ice cold. They decided to follow the stream that dumps into the lake. The stream was full of beautiful rocks and boulders to climb. The boulders made a great spot for sitting in the sun and listening to the clear rushing water make its way downstream and into the lake. There was a neat bridge built of huge logs. Some stayed here while the rest of the group made there way upstream giggling and taking pictures. We had a grand day of adventures which included trying to trap a chipmunk, carving spears, painting themselves with war paint (black marks under the eyes with ashes) and carving spears. We had to make clothes lines and a pulley to lift our food into the air to avoid animals. We were amazed at how much water it takes just to cook and wash our hands and faces. We were using gallons every day. I was building up muscle using the little hand purifier. We all shared in the water purifying adventure and were thankful none of us got sick.

After gathering fire wood we got ready to cook our suppers over the fire. We were actually pretty good at this fire building stuff and we had a nifty propane burner to heat water faster when needed. We finally figured out that it was easier to boil a big pot of water and let everyone have some of it for their instant suppers than to wait for each one to make theirs individually. The favorite food surprise was Bear Creek instant soups and Jiffy pop popcorn to cook over the fire. By this time it was getting dark.

The sky was amazing but the most surprising part for me was the stillness. There were no cell phone, radio, television, automobile or even airplane noises. There was an amazing stillness. And sitting in the dark I felt no fear. I felt less fear than I have in my own home when I am "home alone" which doesn't happen very often.

The next morning a lady ranger came by and visited with us about packing out our trash, etc. We also discovered by this time that the mens toilet is NEVER used so it was very clean and we were happy to make use of it even though most of the girls were excited that they had learned to potty in the woods. We had a few more adventures before we packed up our camp and headed down the mountain. It was so much easier going down and we were happy to find the van and head off for a new adventure. We stopped at a restaurant on the way home and ate an enormous meal. They let us sit in the corner. I'm sure we were a sight to behold.

We all felt stronger and more confident than we had ever felt. I'm excited about the possibility of showing this beautiful spot to others.

Posted by From Redding Mountain at 2:37 PM

Such a wonderful story. I have never hiked and that is on my list to get to one day.

Where did the hike take place?

The hiked to Lena Lake in the Olympic Mountains last August.