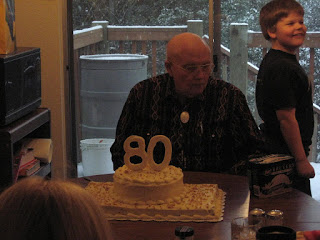 We had our plans for Pawpaw's 80th birthday and they all got changed. It was beyond our control.

This morning we woke up to snow. Pawpaw was supposed to speak for the West Seattle Church of Christ. It was cancelled because of snow and ice. We then went to Lakeview Church of Christ for the worship hour. We had made a huge crock pot of lasagna for pot luck. Which we ended up having for lunch with a broccoli salad I invented. I had made a carrot cake for Pawpaw's birthday which you can see in the picture. I made the giant "80" by printing an "80" outline with my printer and enlarging it with my copier. I placed this copy on the table and covered it with waxed paper. Next I melted white chocolate and filled in the "80". I glued a plastic spoon handle onto the numbers with white chocolate. I refrigerated it until it set. After frosting the cake I pushed the spoon handles into the cake and it was finished. I made enough cake for the potluck and there is still cake left.

We had planned to go to the Seattle Center and up the Space Needle but the weather changed that. We stayed home sat around the fire and sang hymns for a while. We played Catch Phrase too! We ate waaaaaay too much food!!!!

We heard at 5 am that Isaac would be in today and were we ever surprised and elated! We had so much fun being together. Having Isaac and Aunt Linda and Aunt Von around brightens the day and fills it with laughter.
Isaac had been up for 20+ hours and found it cold here! Pawpaw ended up having three birthday surprises.

We had planned to take Papa Murphy's vegetarian pizza to the potluck too! We didn't need it so we saved it to eat in the evening.

We had planned to be at Lakeview for the evening service and to make a family picture. The services were cancelled so no family picture:(

We had a nice day even though it was not what we had planned for it to be.

Posted by From Redding Mountain at 5:28 PM

Sounds like you had a wonderful time in spite of the difficulties with the weather. I missed meeting Von again and seeing Linda too. :(

It was not how we planned it either. We were looking forward to seeing you this past Sunday. It was disappointing to have the weather change our plans.